Holiday season is the time of baking. Dough is mixed, kneaded, rolled out and then cut out or shaped. Most of these traditional preparation steps can also be found in industrial manufacturing but not only in bakeries - Mixers, kneaders, mills and cutters are used in production of rubber articles.

The production of rubber articles started mid-19th century with similar processes, after Charles Goodyear invented the vulcanization of natural rubber in 1839. Before, the application of rubber was focused on impregnation of textiles, shoes and hoses. Vulcanization was the crosslinking of gums to rubber, an elastomeric material, able to recover its shape after deformation on its own. 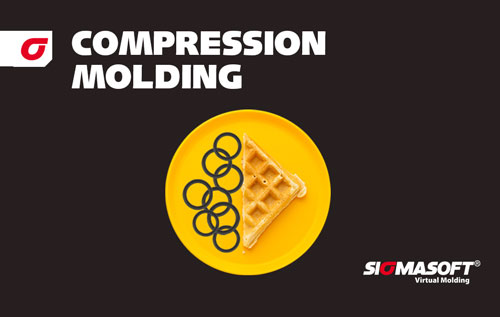 The most manufactured elastomer part ever is the O-ring. This universal seal is present almost everywhere in daily life, with dozens in home appliances and hundreds in vehicles. O-rings are standardized in detail around the globe and categorized in sizes, materials, precision, failure modes and so on. One important feature is common, though, for all the O-rings: a smooth surface is required around the full circumference except small specified flash or mold offset, depending on the scope of the specific standard. An injection point is neither considered nor allowed. Therefore, practically all O-rings are still pressed on two-platen-molds according to the compression molding process.

Circling back to the kitchen now: here the same process is called waffle making. The cold dough is filled into the hot mold, which is closed and clamped for a few minutes until the dough is cured and solid – and comes out as the waffle.

Modern manufacturing of rubber parts is usually based on injection molding. Here, lots of research and development took place. In fact, today it’s possible to dynamically analyze and predict this process in detail over many cycles by means of simulation - with Virtual Molding. Yet this technology tool was unable to simulate the much older process of compression molding. The simple reason is the fact that the cavity is constantly changing shape during closing. At the same time, the inserted preforms change their shapes and physical properties. The simple process suddenly looks technically complex, at least when it has to be planned and optimized by means of modern simulation. Now, fortunately a new validated solution is available from SIGMASOFT which also allows you to compute these traditional processes in manufacturing - at least for elastomers.

To simulate waffle making, only the missing material recipes (quasi the dough-laws) would be required.