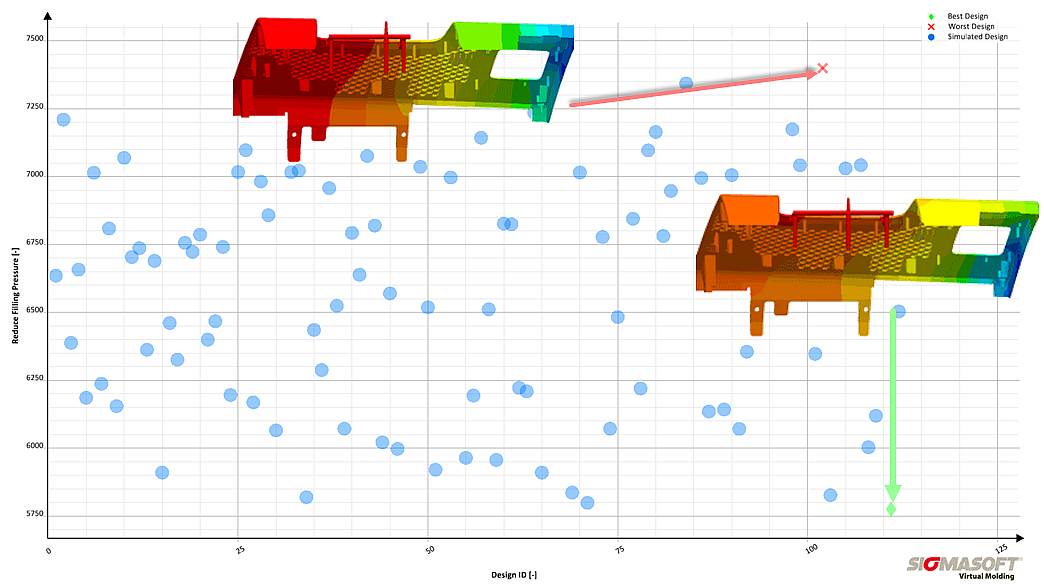 Figure 1 – A molder wanted to switch production of an injection molded part from a 700-ton machine to a 500-ton machine. Via virtual DoE it was possible to modify the position of the injection points. Thereby SIGMA found amongst over a hundred possible gating configurations the one that reduces pressure demand most, and thus minimizes clamping force (green mark).

Aachen, May 21st, 2019 – Every molder is faced with the decision of finding the optimum gating for any molded part. While the formation of weldlines, flow marks or air entrapments may be predominant criteria guiding the positioning of an injection point, a far less common practice is to choose the optimum placement of the gating to reduce the injection molding pressure.

This is, however, a substantial criterion from the economic point of view. A placement of the injection gate that increases injection pressure will imply the need of a larger clamping force, and the higher filling pressure will also shorten the life of the mold.

The Autonomous Optimization technology, available in SIGMASOFT® Virtual Molding, eliminates trial-and-error approaches in the design process, and allows running a substantial number of iterations to find the optimum gating placement for an injection molded part; which is less obvious as the part complexity increases.

An automotive interior part, with an approximate weight of 0,5 kg, was to be molded with a cold runner and two injection gates. The initial simulations showed that the required clamping force was around 540 tons. However, the plant only had machines available in 500 or 700 tons, and the molder reached out to SIGMA Engineering, looking for a solution to reduce the machine size, in order to make the larger machines available for another project.

SIGMASOFT® engineers determined, together with the customer, that it was possible to modify the position of the injection gates. Using the Autonomous Optimization technology, a virtual DoE was set up. In this case, the objective was to reduce injection pressure; the variable to modify was the position of the two gates. In total, 120 experiments were run to find the minimum injection pressure.

The best and worst gating positions, from the point of view of injection pressure demand, are shown in Figure 1. Thanks to Autonomous Optimization, the pressure was reduced by 27% in this application. As a result, the clamping force demand was reduced by 50 tons, and it was possible to use one of the smaller machines available in the plant.

The use of the smaller clamping unit instead of a large one led to lower operation costs per hour for the molder. With a cycle time of 40 seconds and a total number of 250.000 parts in the project, the molder was able to save about $40.000 in project costs due to the change of the gating position.